You are here: Home / magazine 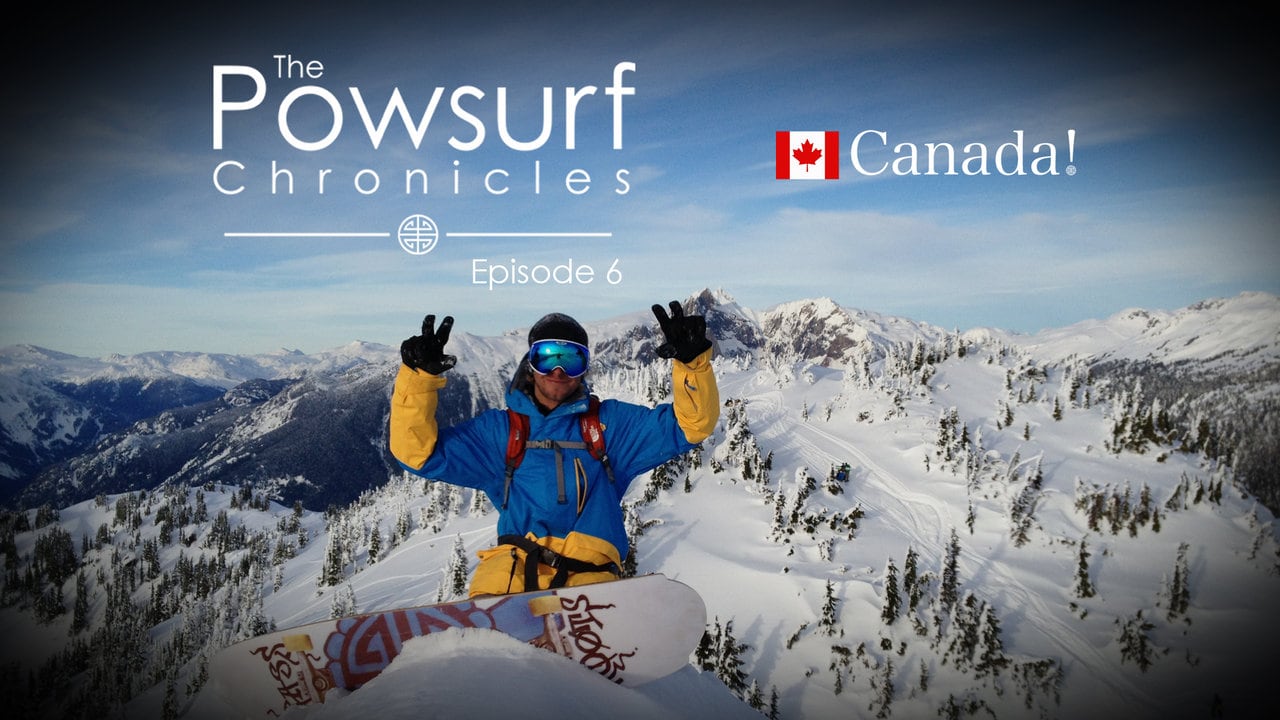 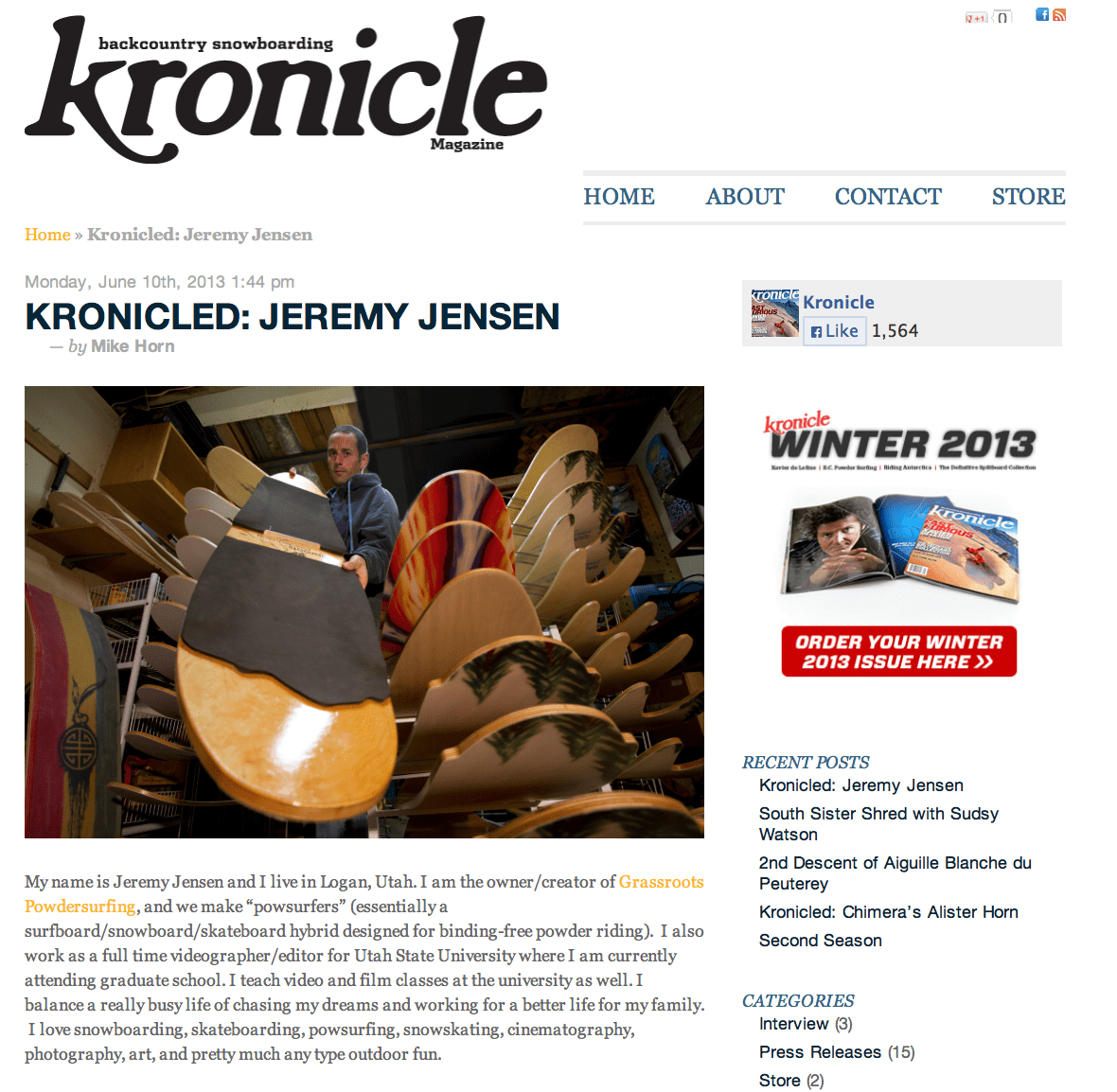 If you haven’t checked out Kronicle backcountry snowboard magazine yet then you are missing out.  This is a great magazine, packed full of mouth watering photography, backcountry gear reviews and great stories.  This mag is geared towards people who love exploring the backcountry and riding fresh pow. We highly recommend buying a copy or two of their print material and following them online.  Last week Jeremy Jensen, owner/creator of Grassroots Powdersurfing sat down with Kronicle Magazine to talk about the history of Grassroots and what the future holds for binding-free riding.  Click the link below to check it out, and don’t forget to subscribe to their feed, their facebook page and their print mag.  You will be glad you did. 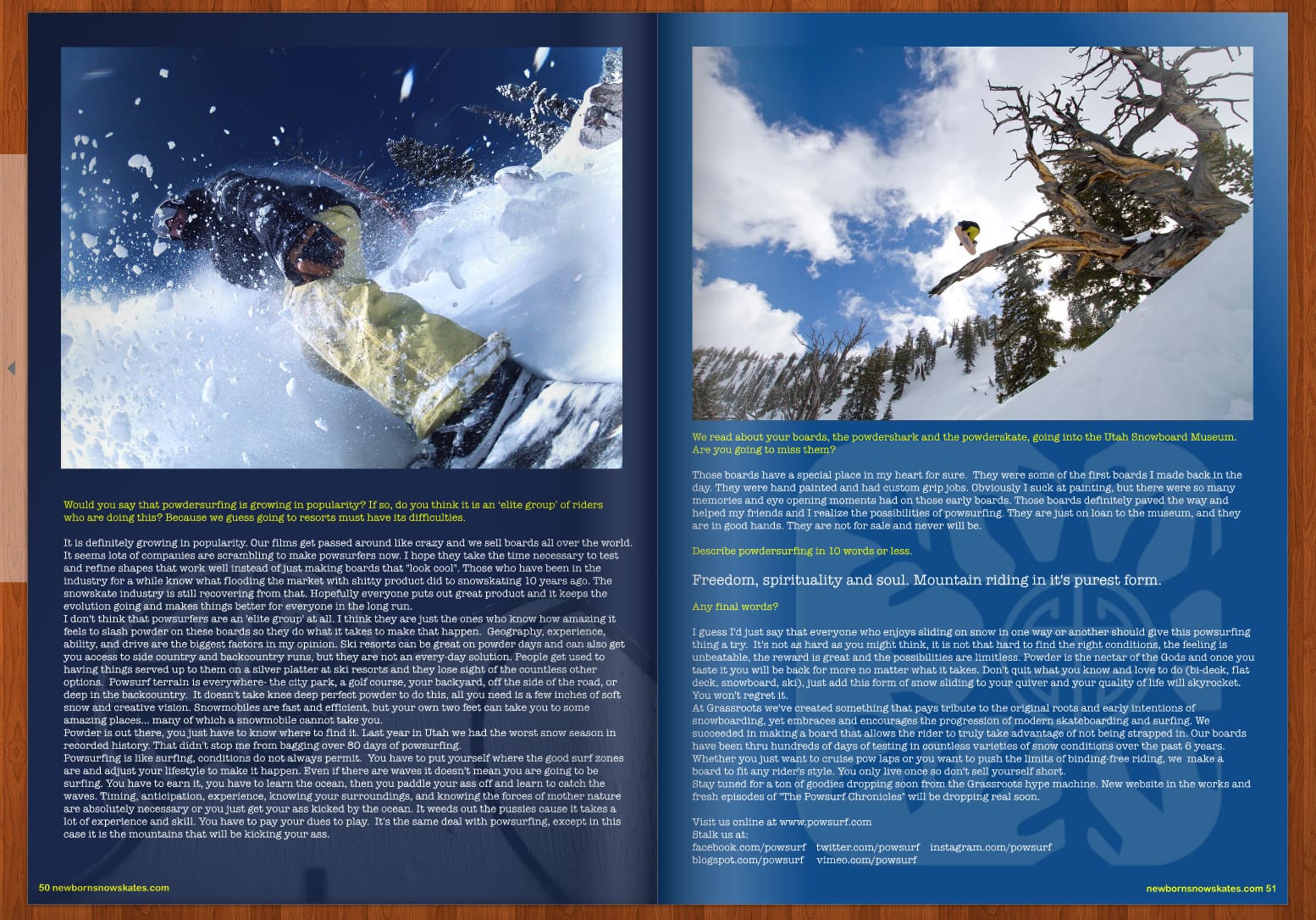 Newborn Snowskate Magazine is born! This new magazine out features snowskating and all types of binding-free snow riding. Newborn is packed full of great imagery, artwork, interviews, product reviews and more. We are proud to be a part of issue #2.  Below is an interview with Jeremy Jensen, creator and owner of Grassroots Powdersurfing. 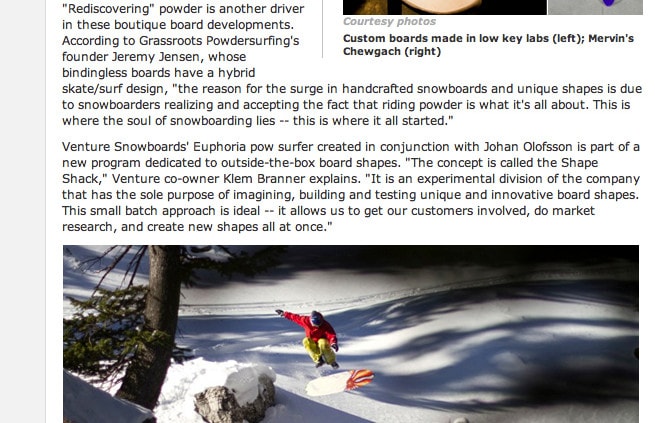 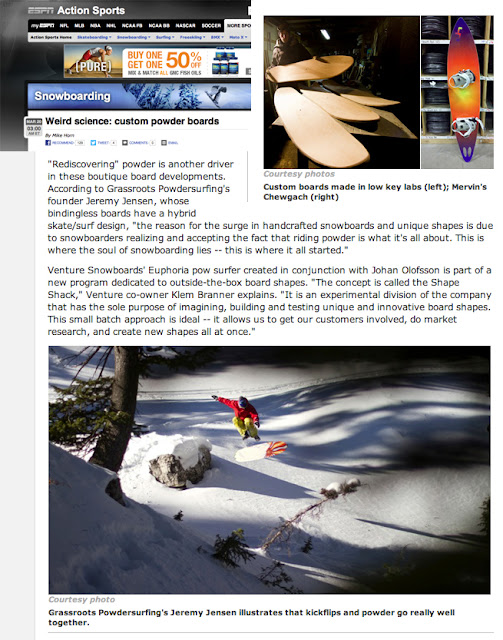 We stumbled upon this article by accident and much to our delight.  Getting love from the folks at ESPN was the last thing we expected, and getting love twice within a few months was pretty awesome. The dudes at ESPN obviously know whats up and we must be doing something right.  What we lack in money and connections, we make up with our passion and drive and it’s nice to see others recognize this.

Big thanks to the guys at ESPN for shining some light on us!

Grassroots came up big in the latest issue of Starfish Snowskate Magazine with the cover, a full page ad, and an 8 page interview with Jeremy Jensen – Founder/Owner/Designer/Shaper/Builder/Cinematographer/Photographer/Web Designer/PR Guy/etc.. of Grassroots Powdersurfing.  Jeremy is obviously a very busy man (which would explain the lack of blog posts this year) but he (I) found some time to sit down and answer a few questions about surfing powder, videography, photography, and Grassroots Powsurfers. 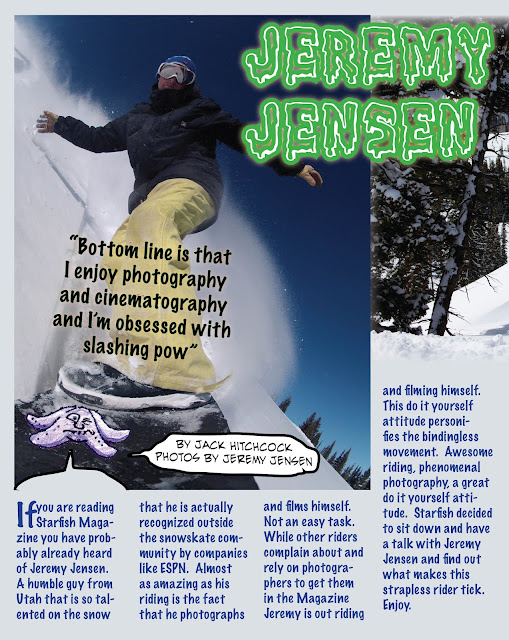 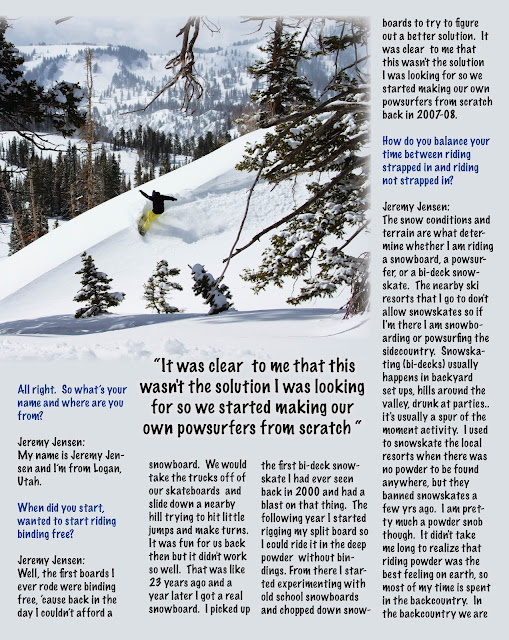 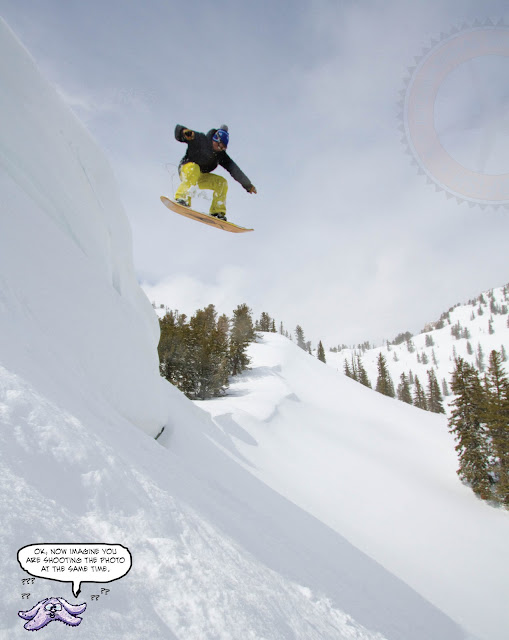 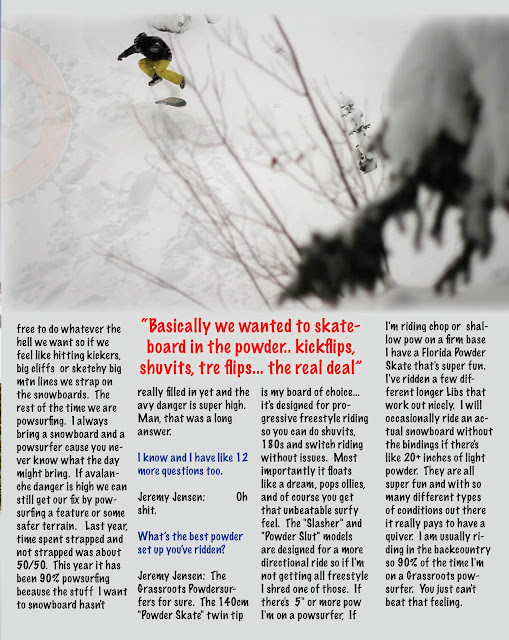 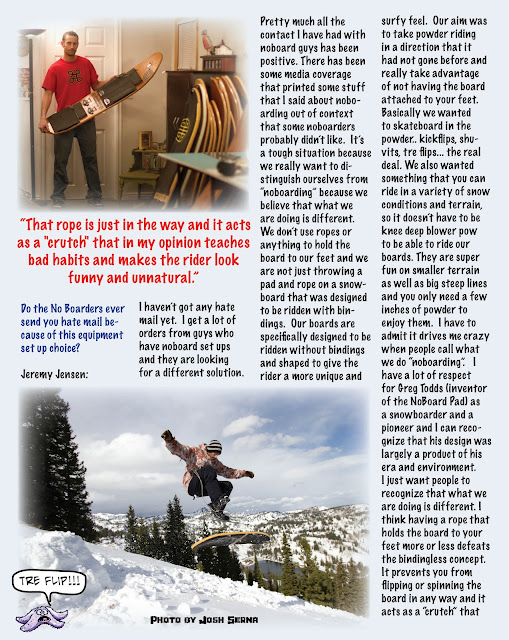 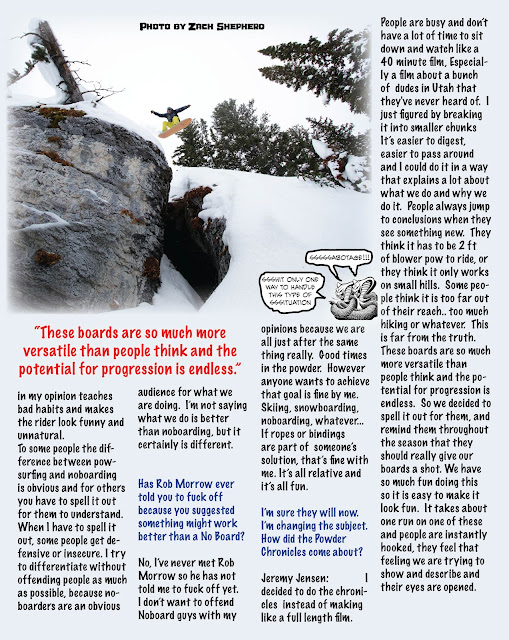 And finally, our ad.  Please help us keep the dream alive and Buy a Grassroots Powsurfer today! 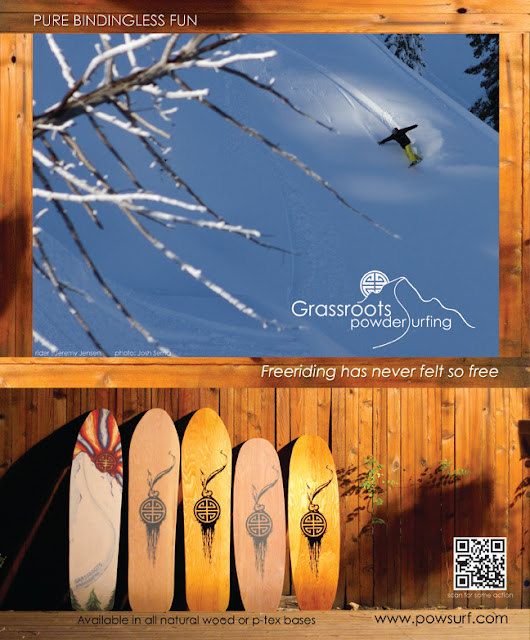 After a killer trip to the Sawtooth Range in Idaho last February I was inspired to write a little story on the adventure.  We met some new binding free friends and slashed copious amounts of powder in some really unique terrain.  Starfish Snowskate Magazine ran the story in this years “Travel Issue”.   Enjoy… 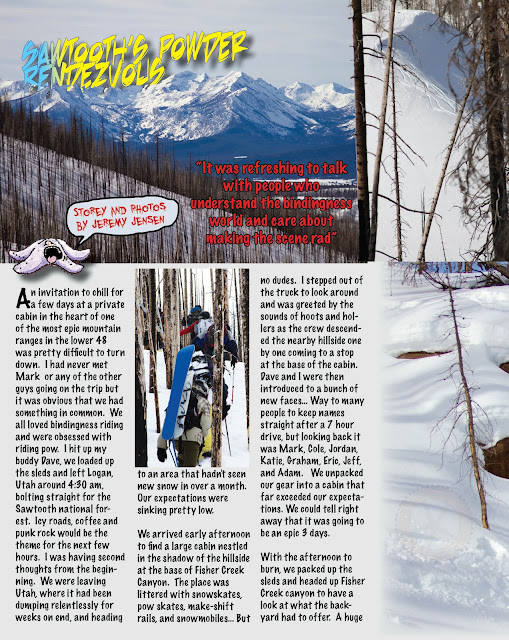 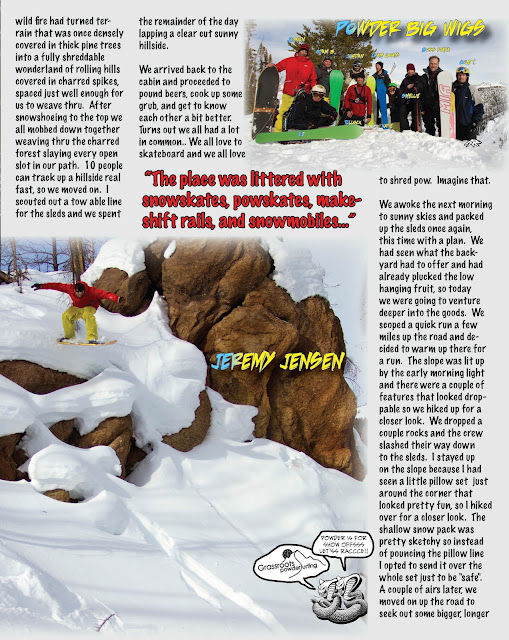 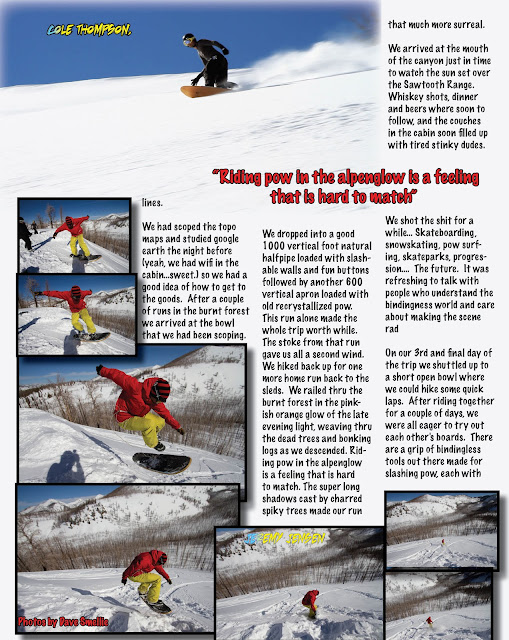 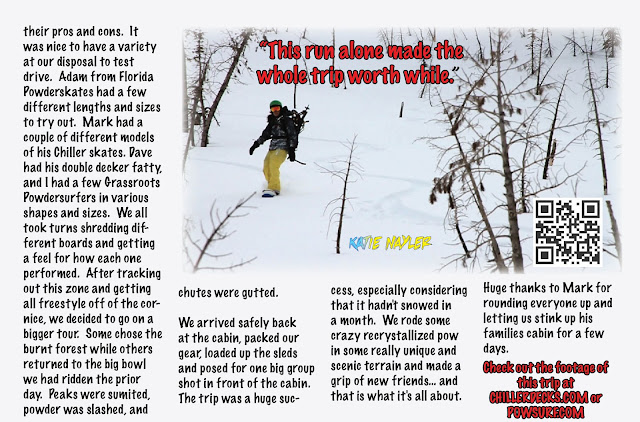 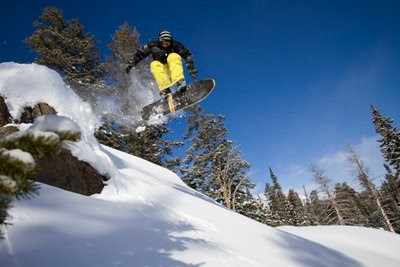 One hell of a good write up on the biglines.com homepage today!

Big thanks to the fellas up north for tracking me down and doing the leg work on this story.  Really well written and spot on.  I was sold at the first paragraph:

“Ok, picture this: you’re surfing a pow line, slashing turns and letting the sunshine light up your roostertails. Out of the corner of your eye, you peep a poppy little pillow and you know the landings perfect. You line it up, adjust your feet and BAM.

Kickflip.
Your feet catch the board and your face catches an updraft of pow as you stomp your landing and set up for your next turn…
Sounds impossible, right?
For Jeremy Jensen, it’s anything but.”

That updraft of powder in your face is what makes powsurfing (or any type of powder riding) truly awesome.  The guys at biglines.com obviously know whats up. 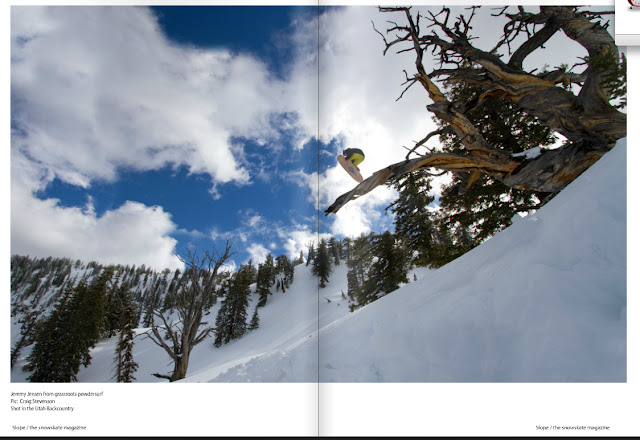 We got an nice double page spread published in Issue 3 of “SLOPE – The Snowskate Magazine” early
this winter.  Wooo hoo!  Congrats to Craig Stevenson for snapping the shot, Jeremy Jensen (myself) for dropping the bomb and props to mother nature for suppling a beautiful day in the Utah backcountry and a nice powder filled landing.

We would have loved to see a little write up in there on Grassroots Powdersurfing to go along with the shot that sticks out as one of the best in the mag… but we can’t complain.. We appreciate them contacting us and making us a part of this issue in one way or another.  Hopefully we can get some written content in there next time.

If you haven’t check out SLOPE Magazine I highly recommend it!  SLOPE is a European online magazine focusing on bindingless snow sports, good friends, and good times.   Bindingless riding is big in Europe and it’s only getting bigger.  These fellas are putting out a great looking E-zine every couple of months or so throughout the winter.

SLOPE Issue #3 can be viewed at http://issuu.com/slope-thesnowskatemag/docs/slope_mag_issue_3

Check out SLOPE at http://www.thesnowskatemag.com