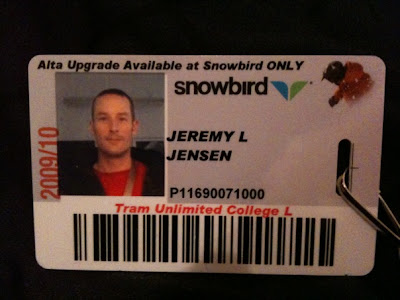 I finally dropped in on the Season Pass to Snowbird. I think I already got my money’s worth these past 3 days. 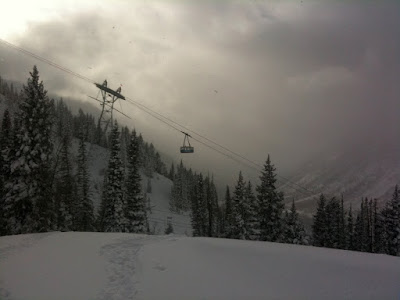 Smellie and I showed up saturday morning to 2 feet or more of the super light and dry Utah pow. Such a sick day. Met up with a bunch of the ol homies …. it felt like the first day of school- seeing all the familiar faces in their new gear…. cute.
Dave and I tore it up for a couple runs before meeting up with some friends from Jackson. Willie McMillon, Mark Carter, Nic Drago, John Makens, Kurt Wastell, Travis Rice, Circe Wallace……. and more. It was pretty ill riding with such a sick crew of snowboard legends. We sprocked our way from the “house” to Daltons hitting every booter and drop in sight. It’s not always rad being the 1oth dude off of a hit but it was worth it riding with these dudes. We spun a couple laps with those guys and decided to move on to a smaller crew of 2 or 3 to maximize pow slashing. Before that Travis hopped on the lift with us to talk “powdersurf”. I was a little thrown off guard sitting on the lift next to the greatest shredder on earth but I managed to not just drool all over myself and I got his contact info to get him some boards. I hooked up with him 2 days later after the comp was over and well…. lets just say Travis Rice is on the Grassroots Powdersurf R&D team… how $#@&ing sick is that?
Saturday was epic- so sunday was next. It dumped all night (another 2 feet) and the canyon road was closed due to a couple of avalanches that hit the road. Ham and I waited in line for an hour or so as the line finally started moving. We were about 30 cars back when they shut it down again. Soooooo bummed. An avalanche had caught and carried 3 Alta patrollers so they shut the canyon down again. Rather than sit in our car for another 2 hours we scoped some areas to ride powdersurfs up above the mansions in the lower canyon.
This was Ham’s first time on the powsurf and the conditions were pretty much 5 inches of dust on bumpy crust. Needless to say Ham kind of struggled and so did I- but it was pretty damn fun anyways. We shredded til we saw the road open back up and away we rolled. 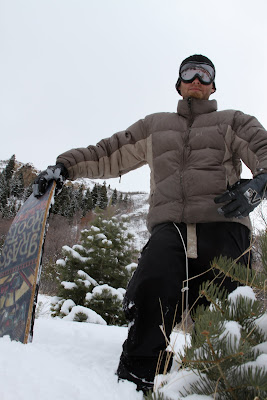