You are here: Home1 / Blog2 / media3 / Mayday!
May 1st brought bluebird conditions and if you knew where to find it, there was cold dry pow to surf as well. It’s becoming harder to find people out there that are still in winter mode.. the backcountry up here is pretty much a ghost town right now. The past two sundays I haven’t seen or heard a soul up there other than my homies and I. More powder for us to slash I guess.
I knew it was supposed to cloud up this afternoon so I showed up early and sessioned solo for a couple of hours until Craig and Dewey showed up. I managed to find some nice pow up high in the N facing slopes. 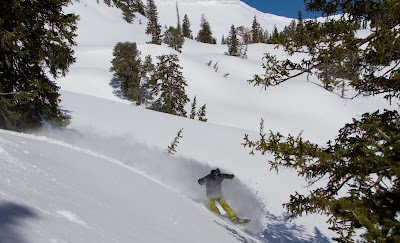 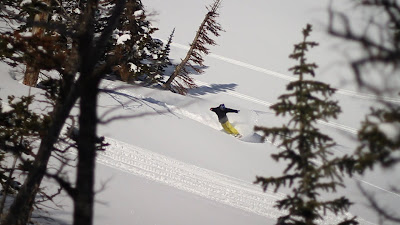 slashes and photos: Jeremy Jensen
All it takes is a little bump in the slope and it’s party time. I found this bump and popped some tricks. 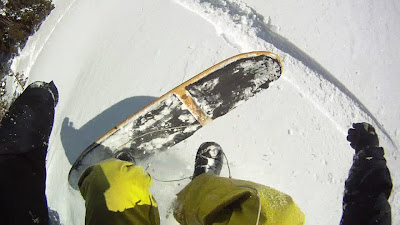 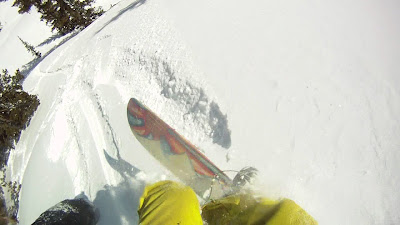 Kickflip
I’ve been finding some pretty fun shots where I can ghost my sled and get some turns. I rigged my pov cam to my sled and powsurfed behind it as it ghosted down the hill. 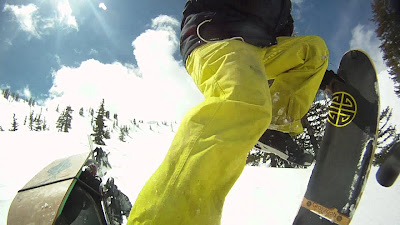 Bomb drop off of my moving sled 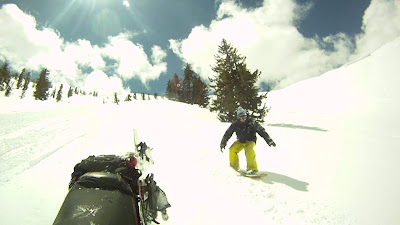 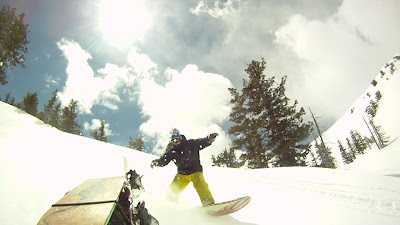 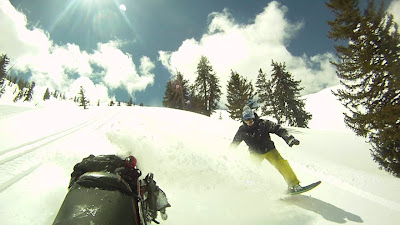 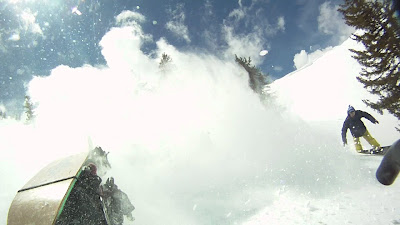 Powder plumes where kicking up pretty big for a sunny day in May
One of the little less know benefits of shrednecking is hot food for lunch. My little cooker attaches to the pipe and heats up leftovers to perfection. The menu for today: Corned beef with roasted potatoes and carrots – served at 10,000 feet. Yum. 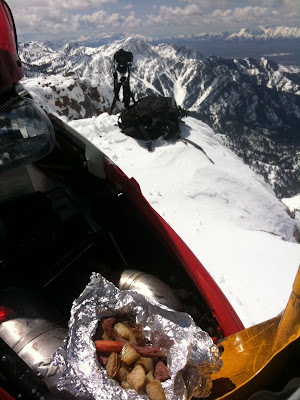 Craig and Dewey finally showed up around noon and with them came fast moving storm clouds and eventually, a full on blizzard. It went from sunny warm and bluebird to a january style blizzard within minutes. We were forced to surf the trees for a little while until the storm passed and the sun popped back out. This cycle would be the norm for the rest of the day. 15 minutes of blizzard, 15 minutes of sunshine. Gotta love spring weather in Utah.
We had numbers now so we were able to start taking runs. We sessioned a familiar spot where we used to ride snowboards back in the day. 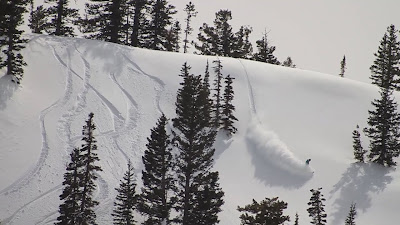 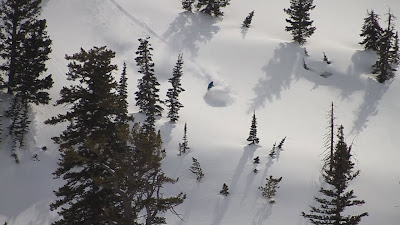 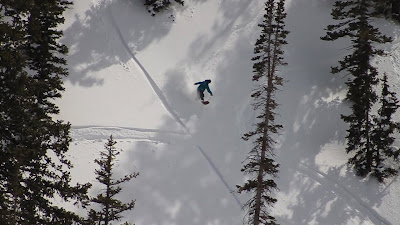 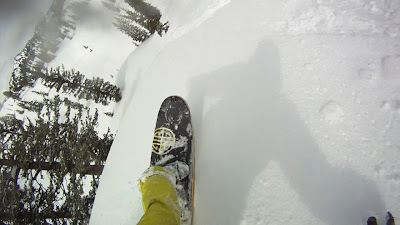 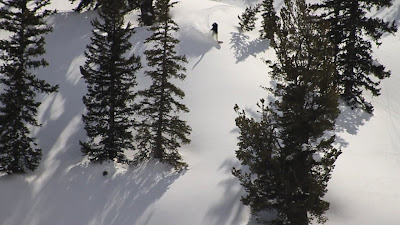 Our snowpack is so high this year that we were able to do a couple of entrances that had not been filled in for years. Pretty scary drop in. Tight and steep! 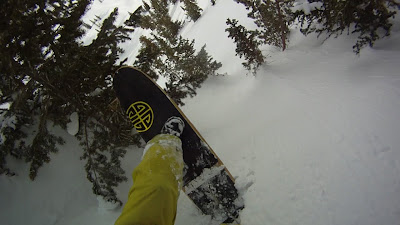 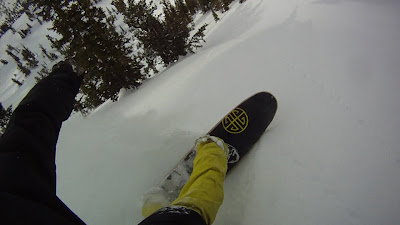 The first turn after the drop in – high speed! 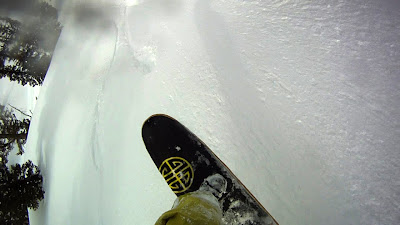 A few turns later, a perfect roller to bust ollies off of 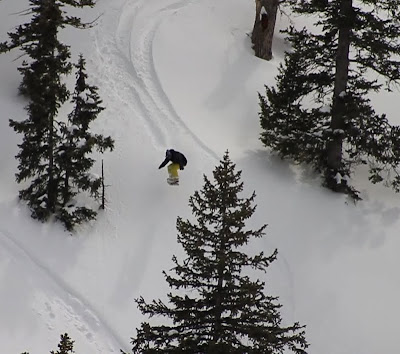 It was so much fun we had to do it again! Actually, the only good snow left was beneath the cliff bands so if we wanted the pow we had to brave the steep, skinny drop in again. It was way scarier this time with our old tracks and two bomb holes below where Dewey and Keneka had landed on their snowboards. 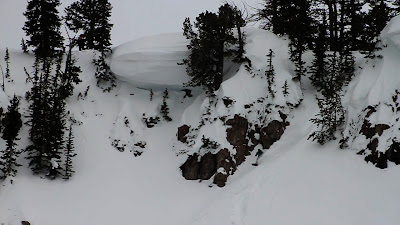 Craig – big slash beneath a skinny drop in 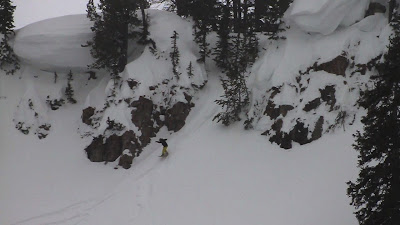 Jeremy – hauling ass thru chop beneath the skinny drop in
Craig and I tried a follow cam run.. not easy. Trying to stay close enough to keep him in the picture while getting blasted with his spray was pretty hard. 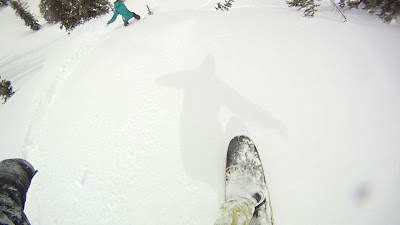 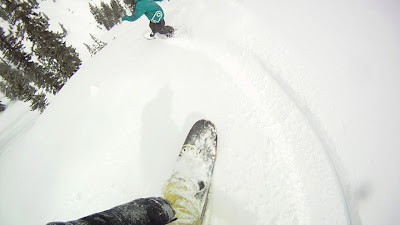 We have been pretty lucky this spring with some nice cool temps and plenty of moisture. Super stoked to be powsurfing this late in the season. Spoiled, but still hoping for more! 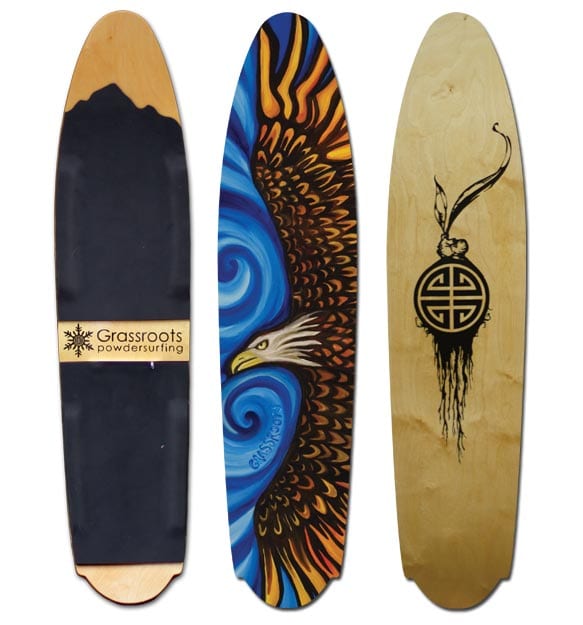 Graphics for the 2014 Line of Stock Powsurfers 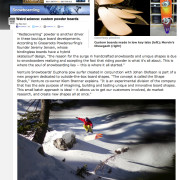 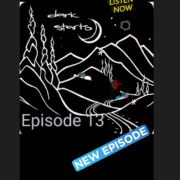